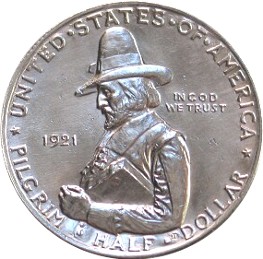 The Wikipedia article of the day for November 28, 2019 is Pilgrim Tercentenary half dollar.
The Pilgrim Tercentenary half dollar was a commemorative fifty-cent coin struck by the United States Bureau of the Mint in 1920 and 1921 to mark the 300th anniversary of the arrival of the Pilgrims in North America. It was designed by Cyrus E. Dallin. Massachusetts congressman Joseph Walsh was involved in joint federal and state efforts to mark the anniversary. He saw a reference to a proposed Maine Centennial half dollar and realized that a coin could be issued for the Pilgrim anniversary in support of the observances at Plymouth, Massachusetts. The bill moved quickly through the legislative process and became the Act of May 12, 1920, with the signature of President Woodrow Wilson. Sculptor James Earle Fraser criticized some aspects of the design, but the Treasury approved it. After a promising start, sales tailed off, and tens of thousands of coins from each year were returned to the Philadelphia Mint for melting.