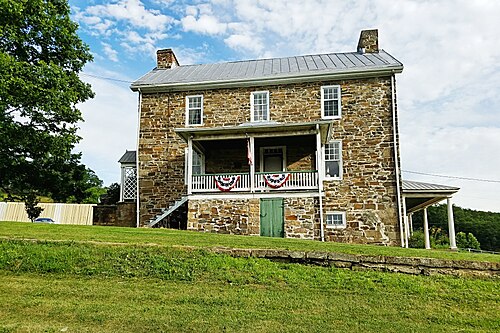 The Wikipedia article of the day for December 4, 2019 is Sloan–Parker House.
The Sloan–Parker House is a late-18th-century stone residence near Junction, Hampshire County, in the U.S. state of West Virginia. It is located on the Northwestern Turnpike (US 50 and WV 28) in the rural Mill Creek valley. The original fieldstone section of the house was erected around 1790 for Richard Sloan and his wife Charlotte Van Horn Sloan. The Sloan family operated a successful weaving business from the house, and their Sloan counterpanes (quilts with block-designs) became well known in the region. In 1854 the family sold the house and 900 acres (360 ha) to the Parker family, who operated a stagecoach line on the Moorefield and North Branch Turnpike; the journey included a stop at the house, where the family served meals to travelers. During the Civil War, both Union and Confederate forces visited the house, and it was ransacked by Union troops for goods and supplies. It was listed on the National Register of Historic Places in 1975.