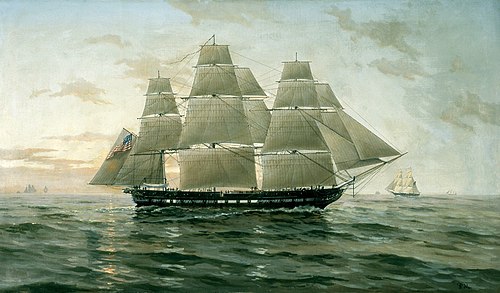 The Wikipedia article of the day for December 2, 2019 is USS Chesapeake (1799).
Chesapeake was a 38-gun wooden-hulled, three-masted heavy frigate of the United States Navy. She was one of the original six frigates authorized by the Naval Act of 1794 and designed by Joshua Humphreys as the young navy’s capital ships. Launched at the Gosport Navy Yard on 2 December 1799, Chesapeake began her career during the Quasi-War with France and saw service in the First Barbary War. On 22 June 1807 she was fired upon by HMS Leopard of the Royal Navy for refusing to allow a search for deserters. Chesapeake’s commanding officer, James Barron, was court-martialed, and the United States instituted the Embargo Act of 1807 against Great Britain. The Chesapeake–Leopard affair and the Embargo Act were two of the precipitating factors that led to the War of 1812. Chesapeake captured five British merchant ships early in the war before being taken by HMS Shannon. Her timbers, sold in 1819, are now part of the Chesapeake Mill in Wickham, England.